Tastes from the heart of nature

He felt the love for cooking already in primary school. He learnt the french style of cooking and was successful in many culinary competitions. Currently he is the head chef at the Szósty Zmysł and Thai Time restaurants in the Dr Irena Eris SPA Hotel in Krynica-Zdrój, where he consciously draws the motivation for cooking from the regional culinary heritage. An interview with an extraordinary chef and cooking enthusiast Janusz Myjak.
What inspires you in composing your dishes?

New ideas come to me when I see a particular ingredient. When I’m creating a new dish, rst I visit the local market, producer, or the deli. It’s a bit unusual, but when I look at a given base product, dishes just appear in front of my eyes in different arrangements. For me it’s important that one ingredient sets the main taste of a given dish, while the other ones only emphasize it, constitute a background. This is my cooking style. We change the menu at our restaurant twice a year. In addition to that, we’re preparing seasonal inserts, when seasonal vegetables and fruit, such as asparagus or rhubarb, are available. When I’m creating a new card, rst I check the availability of seasonal products. I pay particular attention to the form in which a given product has already been featured in the menu, so as to offer a new variation every year. Of course I also use the Internet. It’s the 21st century! I keep up with what’s going on in the world’s top restaurants. I’m inspired by the cuisine of Alain Ducasse – his style is traditional, and the dishes are served perfectly. He’s already received 3 Michelin stars as a young chef – that proves something.

There’s also a Thai restaurant at the hotel. Where did this idea come from?

Our guests mainly expect regional cuisine, which is why our menu is primarily based on local products. Creating another restaurant with a similar, regional pro le would be senseless. This is what inspired us to come up with something exotic. Thai cuisine is an interesting change for our everyday smells and tastes. It is something I keep rediscovering, and it offers really amazing tastes. It is alsonoteworthy that Poles have an increasingly big culinary interest and courage – more and more people cook, learn and experiment with exotic cuisine. And today, in order to prepare exotic dishes at home, you just have to be willing to do it. I run the Cooking Academy at the hotel. I teach our guests how to combine avors and work with ingredients. Why? Because more and more guests are asking us for recipes for dishes served in the Szósty Zmysł restaurant. This is where the idea for the Academy came from.The courses have different themes, concern regional cuisines and typically last for 2 days. We’re cooking four or ve course lunch and end the day with a festive dinner. Some people visit us over dozen times. Not so long ago I was very happy when one participant told me that some French guests had praised her sh soup. Apparently they’ve never had such a good soup before, even in France.

I’m sure that hotel guests also appreciate your preserves.

When I rst started cooking, I was delighted with the availability of different products. Marmalades, preserves, fancy delicacies... And of course everything was packed so beautifully. When this admiration passed, I began to go back to the tastes of my childhood: my mom’s home-made compotes, marmalades, meats. Now I make my own cold cuts – I buy meat and offal and make everything from scratch: hams, galantine, head cheese, bacon. I also smoke bones. Potato soup with chanterelles or bay boletes cooked on smoked bones is very tasty. Together with my brother in law we go shing and then smoke what we catch. I create from what local nature has to offer. Apart from all that I’ve recently also started making my own fruit preserves. I made all the preserves served in the hotel.When I once bought jam in a store, after some time it went bad in the refrigerator, even though it was untouched. I don’t have this problem with my own preserves. When my kid opens a jar – he eats the whole thing! For me it’s the best evidence of whether I matched the ingredients well.

What is your goal as a cook?

My primary goal is to keep our restaurant at a high level. Obviously I would be extremely delighted to invite a big star here. This is not a goal in itself though. It’s important for the quality of dishes prepared by us not to change. I would also like for the people I work with to feel what I’d felt when I rst started my culinary adventure – that cooking is something more than just processing of food. My greatest satisfaction is of course when our guests enjoy the dishes we serve. I’m also equally happy when I see that people working with me in the kitchen develop. Frequently, when I’m creating a new menu, I listen to their ideas. I’m not closing the door in front of anyone. I support people with good ideas.

CRAYFISH SAUCE
60 g cray sh shells
2 spoons of oil
80 g carrot
30 g onion
1 garlic clove
1 tomato
1 teaspoon of tomato concentrate
150 ml white wine
800 ml sh stock
30 ml cognac
bouquet garni (wrap
1 sprig of thyme, 2 sprigs of parsley,
several ribbed celery leaves,
1 bay leaf and several peppercorn
in green leek leaves, and tie
them with a string so they
don’t fall apart
during cooking)
salt and pepper to taste
80 g cray fish tails
100 ml sour cream 30%
Rinse, dry, and portion the llet. Cut the skin lengthways using a knife, sprinkle with salt and pepper, cover with dill, and set aside in a cool place for an hour.Then fry it on a hot pan, rst on the side with the skin. Pour the stock over broccoli and cook until soft. Strain the broccoli and wring gently. Add butter and sour cream, and blend to obtain a very creamy soup. Season to taste. Fry the shells in heated oil.Then add cut vegetables, pour over with cognac, and set on re. Add wine, reduce, add all other ingredients apart from cray sh tails and sour cream, pour over with the stock, and cook for 40-50 minutes over low heat. Strain through a ne strainer. Add cray sh tails and cream, and boil until the sauce starts to thicken. Serve the sh on the cream of broccoli with crayfish sauce and blanched peas. 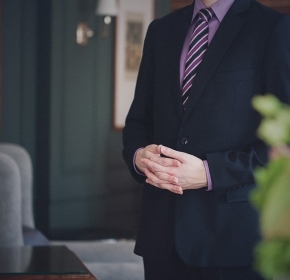